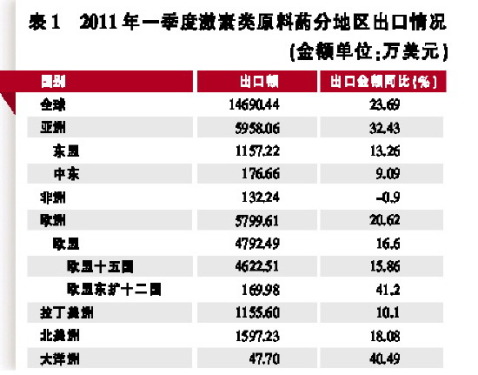 Exports of hormones recorded good growth in the first quarter

The export amount increased by 23.69% year-on-year, laying the foundation for export throughout the year

In the first quarter of this year, there were 248 exporters of hormonal APIs. From the distribution of export companies by province and city, Zhejiang, Jiangsu, and Shanghai have a large number of export companies, ranking among the top three. Judging from the ranking of export value, Zhejiang, Tianjin and Jiangsu dominate. Tianjin Tianfa Pharmaceutical Import & Export Co., Ltd. ranked first in exports. Zhejiang Xianyu Pharmaceutical Co., Ltd., Henan Lihua Pharmaceutical Co., Ltd., and Changzhou Jiaerke Pharmaceutical Group Co., Ltd. ranked second, third, and third. Four, four companies accounted for 32.75% of the export value, which has a certain leading role in the market.

In 2008, a sudden financial turmoil made the export of hormonal APIs in a downturn. After the crisis, with the continuous recovery of the international economy, China's exports of hormonal APIs showed a good growth trend. In the first quarter of this year, the export value increased by 23.69% year-on-year, which laid the foundation for the export growth for the whole year.

However, it must be mentioned that due to factors such as rising raw materials and changes in exchange rates in 2011, the operating profits of China's exporters of hormonal APIs will be squeezed. At the same time, the utilization of raw materials is low, energy consumption and environmental pollution, and byproducts Failure to effectively use such issues will still plague China's hormonal API manufacturers. (China Medical Insurance Association Du Hong)