The fifth instar larvae opened the leaves a little later. On the second day, the mulberry was evenly distributed on the silkworm seat. After 1 to 2 hours, after the silkworms basically climbed the mulberry, they picked up the mulberry in order (cut the mouth down) and placed Both sides of the bamboo raft form a stable slope. In order to prevent the silkworm from falling, it can be discharged in a small amount, and it will be extended to both sides as the feeding amount increases. Silkwalks need to keep sidewalks for operation.

(three) to the mulberry method

The silkworm shoots new shoots in the middle of the autumn, and shoots shoots in the middle and late autumn, and once a day to the mulberry, during the full-food period or in the case of high temperature and dryness, appropriate feeding is performed once. Close doors and windows after mulberry to prevent mulberry leaves from drying out. When there are too many branches on both sides, the branches that have been eaten should be removed before feeding.

1. Properly postponing to Sang appropriately postponing to Sang can make silkworm have a strong sense of hunger, so that the silkworm can be quickly wounded. The first time the mulberry was used with thick, hard, leafy branches, to ensure that the slope does not collapse, when the mulberry and the mulberry were placed, the three leaves and the small shoot were removed. Branches should be as dense as possible, or be lined with a layer of stearin plastic mesh on the slope to prevent the silkworm from falling down. At the same time, when the silkworm is basically in the strip, the lychee is slanted immediately.

Before the fifth instar period, the silkworm body was disinfected with anti-stuck powder, and after the mulberry leaves were eaten the next day, the silkworm silkworm was sterilized with fresh lime powder or anti-static powder, and the fifth instar was used for the second day, 4 days and 6 days. Three hundred times dilution of silkworm flies was sprayed on the silkworm evenly to control the fly maggot disease. The use of exterminated silkworm should be ready for use. Before and after use, 4 to 6 hours should not be used to lime the silkworms, so as not to reduce the efficacy.

3, according to local conditions on the fifth instar silkworm into the reduced food period, pay attention to the formation of the slope, in the late food reduced the mulberry to leaf feeding, and reuse 1 lime powder. When about 1% of the mature silkworms on the slopes are used, hormones are added at 3 to 5 pm on the same day, and the silkworms are caught on the morning of the next day, or the mature silkworms are collected on the larvae, or the slopes are laid flat in the late stage of feeding. Feed the leaves and catch the silkworms. The inexperienced silkworm raises the branches and shakes them gently to make the eggs fall and collect the silkworms. The use of square grids is suitable for outdoor pre-loading, so that the silkworm manhole speed is fast, and the silkworm excrement and urine are all outdoors. Helps reduce indoor humidity and improve tannins.

Compressed air is purified through the air dryer and filters to a certain level for main generator to work with. Air buffer is incorporated for smooth supply of compressed air thus to reduce fluctuation of compressed air source. The generator produces oxygen with PSA (pressure swing adsorption) technology, which is a time proven oxygen generation method. Oxygen of desired purity at 93%Â±2% is delivered to oxygen buffer tank for smooth supply of product gas. Oxygen in buffer tank is maintained at 4bar pressure, then reach to 150bar to filling cylinders with an oxygen booster. 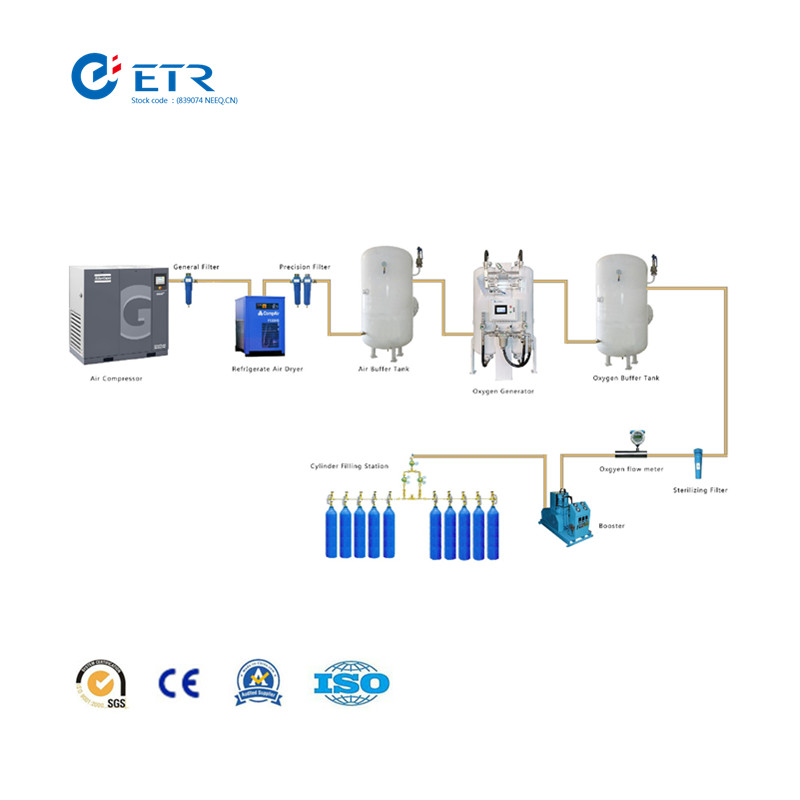